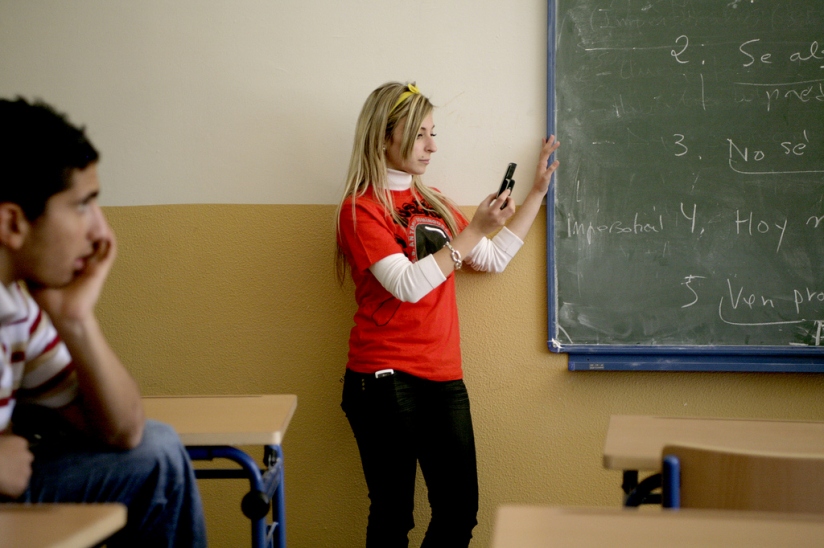 - Search Engines Cell. These 'human search engines' analysed the data on supply and demand, cross-referenced them and put people in contact to exchange knowledge.

Third Session
Jenny is a 4th-year secondary student and an active member of the motivator group within the communication cell the BCK set up in the school. The other members of the motivator group were also very keen to 'expand knowledge exchange'. Another student, Cortés (who was somewhat reticent at the start because he said he didn't understand the theoretical concepts behind the project) made a great effort to show how useful his PR skills (as he put it) were to bring together knowledge supply and demand.
We were impressed by Raúl's serious approach to the work and the way he took responsibility for taking the group out to other classes. He acted as producer-manager for each new presentation of the project, always with one eye on his watch and the other on the next point on the script. Joaquín was very confident and convincing presenting the project mid-morning to a 3rd-year secondary class, whilst Jessi gave out green and pink post-its and encouraged students to write what they could teach and what they wanted to learn. And these are only two of many examples, including Francisco, Antonio, Isaac, Aurori, Alejandro, Rocío...

Wednesday's work was very well organised by all workshop participants. There were strict timings, well-defined tasks, a polished script, and all the materials were prepared and all needs were seen to. It was however, paradoxically, the most difficult day for me to chronicle. Motivation, expectation, smiles and a fantastic atmosphere are difficult to get across in writing. Not to mention the personal stories of teachers and students, shared thoughts and conversations and, naturally, the inevitable tensions and criticisms of the methodology. All this was intensified by the changes taking place in the students – changes based exclusively on motivation and the learning process through communication with others.
Would it possible to maintain the same level of work and enthusiasm
if the project went on for longer or became a fixed part of the school's workings? Is motivation key for understanding that effort is one more ingredient in the learning process? What tools can teachers use to communicate themselves and motivate students better? How can they avoid a feeling of distance between them and their students creeping back during the rest of the year?

Fourth Session
After preparing all the materials and making a preliminary visit to pick our site, we left the school for the street market in Las 3000 Viviendas neighbourhood with the aim of expanding the BCK out beyond the school. The materials for our visit to the street market included a table and chairs to set up our stand, posters to identify who we were, a megaphone, a mounting board for the offers and requests, post-its and pens… and lots of enthusiasm!
At the street market, hundreds of people were selling fruit, vegetables, clothes, ironmongery, CDs and other objects. The idea of the motivator group was to join in with this environment and include knowledge exchange as another merchandise to be traded in the market. The methodology was the same as before: coloured post-its so people could say what they wanted to learn and what they could teach.
Some of the students in the group had family in the market and they used these contacts to reassure people that our cause was worthwhile. One of the shoe stalls gave us some of their space to set up our stand.
The groups split up and the street market carried on its business of constant exchange. They had accepted a new, less tangible merchandise to be traded: the exchange of ideas.
One of the major problems in this neighbourhood is school truancy. At the street market we saw several students who should have been at school. It's difficult to verify, but when these kids (and their parents) saw the school attendance campaign and the group of students working on the stand, perhaps they thought "Maybe it wouldn't be a bad idea to come to school more often". The best part of the day in the neighbourhood,though, was seeing the sparkle in people's eyes when they saw that – contrary to what we usually hear – maybe the youth of today wasn't that bad after all… "Maybe they're worth listening to because they've got something to tell us. And perhaps we've got something positive and valuable to teach them".

Fith Session: Exchange Market at the School
Today we held an information exchange market at the school itself. This market travelled through the playground, basketball court, gym, music room, 3rd-year classroom and school hall and finished with lunch in the school canteen with all participants. We applied maths, physics, music, mechanics and physical education to the offers of and requests for knowledge that the human search engines had found during the week inside and outside school. These offers and requests were the result of a survey to assess what was worth learning and teaching reciprocally, following only the criteria set by each participant and the experience and process itself.
This was a cathartic experience for all participants, a day planned by the motivator group for learning and playing, organised so the whole school could enjoy what education should be about. The most interesting thing was that ties had been strengthened, new communities of interest had been set up, and what was exchanged wasn't actually as important as the actors involved in the exchange.
The motivator group, divided up into cells, put up a notice in the school hall giving details of when and where the exchanges would take place:
- How to clean a motorbike carburettor (entrance area). Inma, a teacher who played a very active role in the whole process, wanted to learn how to clean the carburettor on her motorbike, a Vespa she brought along for the activity. Almost the whole school turned up to see Manual explain how to do it. Inma took her bike away not only with a clean carburettor, but with her indicators fixed as well. Manual wasn't that keen on taking part at first, but soon realised that he possessed valuable mechanics expertise of use to the school.
- What is Tuenti? (computer room). Cristian is a 14-year-old lad now in reception class after several years of truancy. He offered his knowledge of Tuenti, a social networking site popular with teenagers: he explained how to set up an account, how to share images, videos and comments. This website operates on a similar philosophy to the BCK, where sharing knowledge and resources is key.
- Martial arts and philosophy (outside gym). Roberto is the school's Director of Studies, a philosophy teacher and was also onetime karate champion in Andalucía. He offered to teach how to apply karate philosophy to life. Isaac, a student and member of the motivator group, complemented the theory with a Thai boxing class.
- Mathematics and physics applied to basketball (basketball court). Two teachers competed to see who could find the most appealing way of applying mathematics and physics to basketball. We learnt how to formulate mathematical expressions for a ball's bounces and why a ball always bounces lower and lower, and we used physics to analyse the straight and parabolic movements of a ball thrown from the free-shot line, taking account of space, time and speed.
- Learn how to play musical instruments and create rhythms (music room). The rhythm chosen by the music teacher for us to learn was a bulería, a traditional Andalusian song. We tried out clapping, a rhythm box, guitar and drums and finished with a batucada with tambourines, drums, bells, etc.
Finally all the participants got together for lunch, where we all had a great time. For anyone interested, there are videos of some of the main highlights. We are very pleased to have set up this energising pilot experience, although we are well aware that there are still many things to think and write about.

Translated by ACVIC. Centre d'Arts Contemporànies
We do recomend to watch the documentary made after the experience (Click on mediadock) 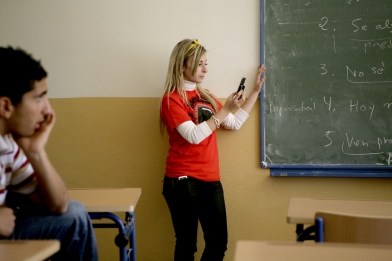