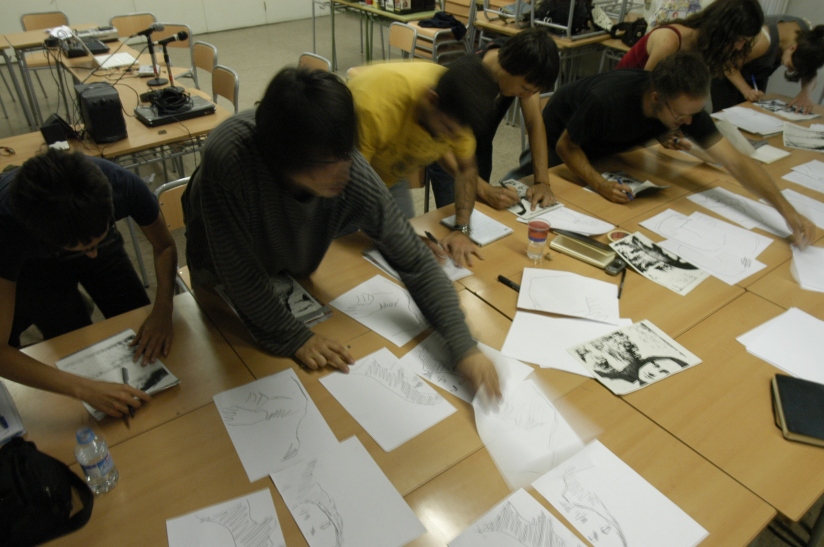 a) Concept, practise, tool in which it is inspired upon
The peer-to-peer file sharing (P2P) communications protocol BitTorrent

c) Operating instructions
• Introduction to basic P2P and the Bittorrent protocol
• A competition game is laid out, with groups of 4 or 3
• Each group is given a photocopy of the Mona Lisa portrait, split up in four parts (four A4 sheets) and a carbon paper sheet for each of the participants. Each participant must end up with a complete copy of the Mona¡ Lisa in the shortest time possible. The first team to complete all 3 or 4 copies of the portrait wins the game.
• At the beginning, all team members start copying their Mona Lisa parts, but due to variable copying speeds (some are faster than others) some participants will get stuck, as they will be missing parts of the picture yet to be copied by themselves (the "original" photocopies handled at the kick-off). This situation is of utmost importance to the game.
• At some point, they will be encouraged to take all copies into account, both the "originals" and the derived ones (those parts already copied by their group peers or by other groups members). This suggestion is meant to make them reflect on the advantages of treating all copies as "originals" and from a collective mentality, and how that can ease the whole production process, both from an individual as well as a collective standpoint.
• The game process is then analyzed: who was the fastest, slowest, at an individual level, what group finished first and why, what problems and coordination solutions popped up along the way, reproduction qualities, etc.

d) Pros
• A team competition is transformed into a collective strategy and cooperation game.
• The analogue simulation game is very effective in the assimilation of technical knowledge, especially among newbies
• It optimizes group work and builds trust between participants