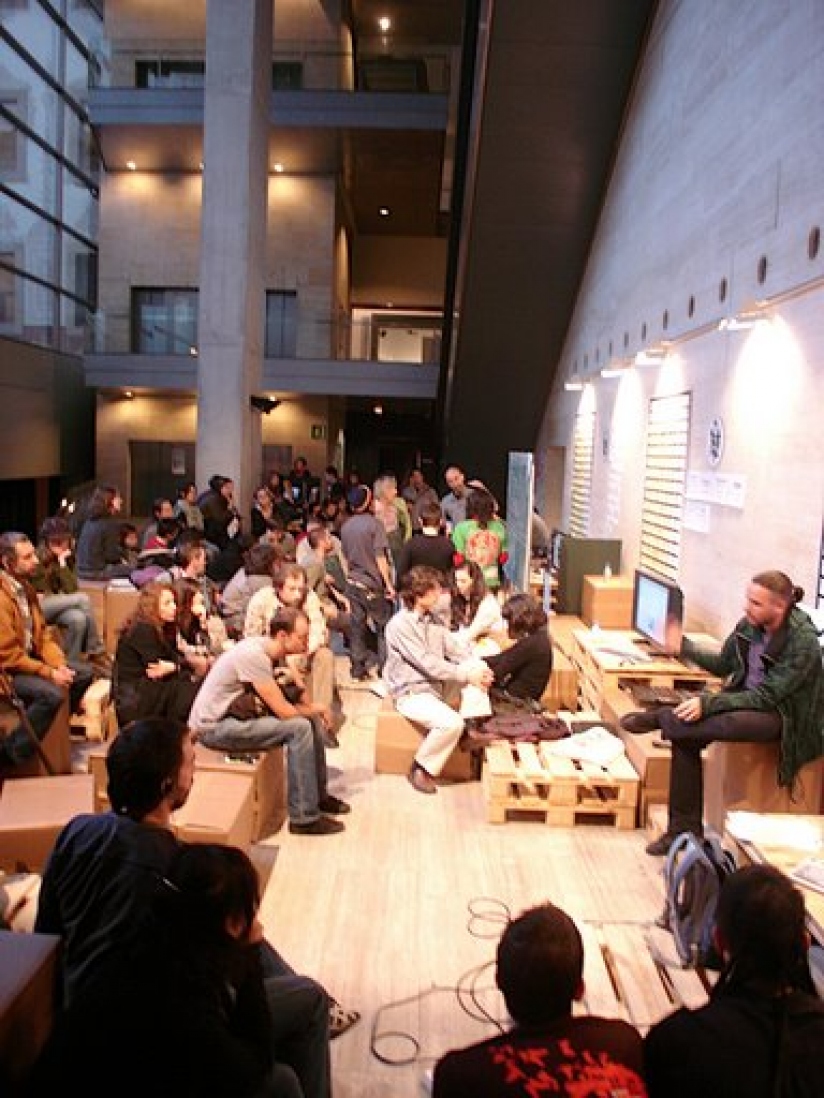 The world wide web has been proposed in the early nineties as a free space, through which anyone could have access to a wide diversity of human knowledge. Later on, the web has also been identified as a brave new world in which every person would have the opportunity to interact with virtually any other and share his/her own knowledge, adding to the creation of a "collective intelligence", which would contain all sorts of useful (and also useless) information. If in one hand that has led to real disruptive technologies allowing new voices to be expressed throughout the world, on the other hand the huge amount of information available in any single moment exceeded what a person could be able to understand in a lifetime.

There are different ways to avoid being lost in such an ocean of information. Up until a couple of decades ago, there were central information authorities -big press, for instance- that would publish "the truth that matters" - supposedly. Time has proven that assumption to be either misleading or totally false. Relying on a centralized infrastructure to choose what should or should not be published is allowing power to interfere in the flow of information. But the opposite is not viable either: if anyone can express any idea, how can one tell what's right or wrong, what's interesting or not?

The solution for that situation seems to be understanding that any information can only be evaluated as worthy or not in a given context. In that sense, distributing the power of decision to the members of a group of interest can be the way to make moderation balanced. A technology news website called Slashdot has created an innovative approach, by giving frequent users the temporary power to edit and moderate contributions to the website. The website has a moderation queue: new articles submitted to it are held in a space where they can be evaluated by those users. The users earn the ability to moderate the contributions based on a series of measures of what they have contributed in the past to the website: approved articles, appreciated comments, frequency of visits, and so on.

That kind of moderation has been called reputation-based, or "karma" moderation, after the oriental concept of karma ("the effects of all deeds actively create past, present and future experiences, thus making one responsible for one's own life, and the pain and joy it brings to others", according to the Wikipedia entry on "Karma").

In such a moderation system, the choice of what pieces of information are considered valid to a specific community is made by its own users, collectively. That makes it an interesting option when a group of people wants to find out what can be held as important information to itself.

Goal: Acknowledge the use of a collective moderation layer to facilitate participatory editorial processes, and come up with material for a collective publication that describes the group of attendants.


1. Introduction - reading of a short text (previous page) about collective moderation. Presentation of the goals and procedures of the workshop.

2. Each person receives 3 post-its and are encouraged to write down in each one a small paragraph about themselves. They don't need to be extensive or objective, but focus is given in diversity – people are supposed to describe unique characteristics. They are required also to sign their post-its with a nickname. All post-its are put in a simple billboard.

3. Pre-selection: everybody has the chance to read all the posts. The billboard has another block of blank post-its, so that anyone wishing to write a comment upon someone else's paragraphs is encouraged to. Those paragraphs who are considered interesting (for whatever personal reason) are then transferred to a second billboard. It is important to stress at this point that all the participants have the chance to choose any post except the ones they have written. There can be debate about the paragraphs, but the goal at this point is only defining a first, raw, cut of the contents.

4. All attendants earn moderation points starting on 3 and growing to the number of their paragraphs that have been pre-selected: someone whose paragraphs were not selected at all has 3 points, those who had one paragraph selected have 4 points, and so on.

6.  Collective moderation: everybody will read again the pre-selected posts on the second billboard. They will use the points they have earned to moderate the content: moving any paragraph one position up or down costs one point. They still can write more comment post-its and debate the posts. The process goes on until all moderation points are spent.

7.  To finish, the most ranked paragraphs are chosen, in the same number as people attending the workshop (i.e. 10 people, 10 paragraphs). If there are exceeding paragraphs with similar ranking, those with most comments will be selected.

8. That may be followed by a debate regarding the benefits and eventual issues raised by this kind of moderation.


Notes from the discussion in MetaReciclagem mailing list regarding the workshop (can derivate to insights for the debate):


Elenara Iabel: so, following Tel Quel - people, for a set of biases, don't know what they are able to think. Currently, the individual only exists through codes and languages, exists only as fiction, or "is the point of convergence of all signs". There is a way out: raising awareness that he/she is also a producer of signs, and in that case would refuse to be written. Breaking with the word that about him/her is said [and creating his/her own versions], makes effective his/her own generation. Iconic symbol of his/her own platform: is going to live what he/she says, is actor of his/her own character.

Felipe Fonseca: It is more specific, actually. Slashdot is something that, in some way, works. For a specific goal... Those guys have developed an algorithm that allows some level of collective moderation, that is fairly open. No, it is not very human, and is far from trying to look like the collective mediation that takes place when people meet and look in each others' eyes. But it would be dumb to expect that from a content management system, wouldn't it?

Marcelo Braz: Points are not a good word, but one could think of value – assigning value to what is meaningful. And it happens only inside that event, in a temporary way. Outside it will have no value at all, like a TAZ. I'm not that fond to slashdot, even though I think their moderation algorithm is interesting. But I'd say it is far from human intelligence of selecting and searching knowledge. Because there the fashion content is also privileged. Actually, like felipe said, I'm more into systems of "mining" and "lapidation" from intuition and vis-à-vis gaze.


1. Ask everyone in the group to write a word that can represent the whole group (there will be words like collective, difference, team, strenght...).

2. Ask people to tell each other to put the signs in front of them, in the ground with their own words.

3. Everybody thinks again in the words they have written and decide once again which word describes best the group.

4. Ask them to move until the word they like most. Those who move leave their sign behind.

5. Then will happen things like: the guy who wrote "team" now likes more "collective" so he / she walks to "collective".

6. In the end, there will be, say, 5 people in collective, 2 in team, and so on. All words are "group truth", some of them are more collective truths and the reputation of those who wrote is not based on their faces but their words.

7. Then you can write in the billboard the words sorted by popularity, but reminds people that all of them are true. And explain that computers make such calculations in an automatic way, even progressively calculating the reputations of those who choose the most collective words.

Required material: one roll of wool, string or rope.

The idea is throwing the roll making the string stretch to one person in the circle. Someone is chosen randomly, like when you browse in the net, only driven by the curiosity of knowing more. Then when throwing the roll, you hold the end of the string, throw the roll to the person telling something about him/her, you know? like, I'm throwing to you because you caught my interest by the color of your eyes, something like that. The thing goes on and in some time there is a mess of strings connecting each other, a mandala. Well, after all have talked about themselves and the others they are supposed to do a simple task, like closing a window, without letting go a single string. All must think about how to solve the task without harming the whole net. And then they must get loose from the mandala but leave it in the same format.

The texts can circulate in different tables and become theme of conversation in these tables. After some 30 minutes, people change tables and the texts remain. A host receives the new guests and explains what have been discussed before... a mix of p2p and world cafe. 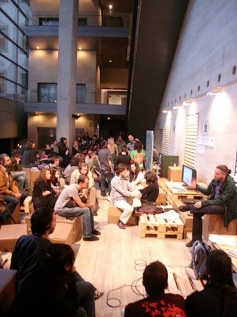