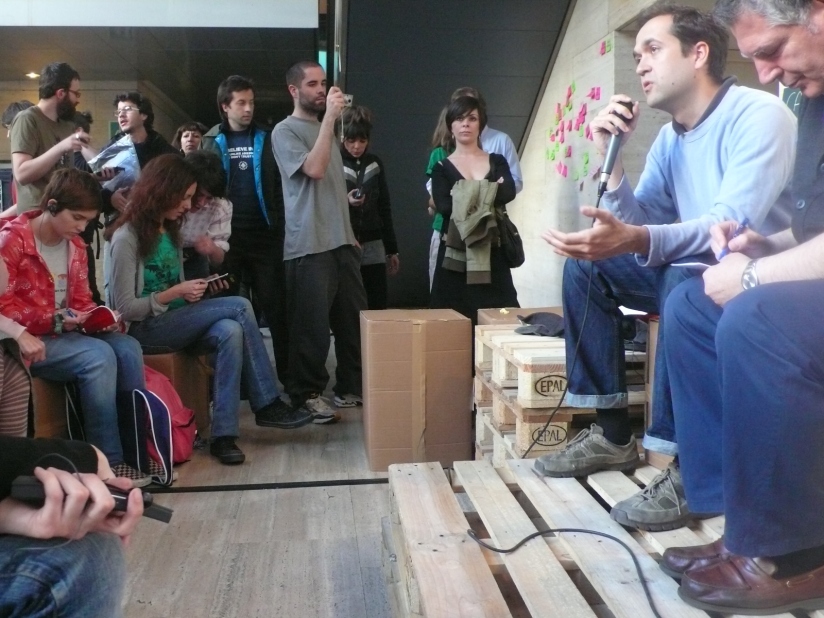 
The commons is created and recreated, connected and reconnected: it is born from the interaction of those concerned who miss something that is being denied to them, which they took for granted, as an inalienable legacy. The commons is a state of emergence (as it is unpredictable and urgent), arising from the empowerment of those affected who claim rights that have been threatened or destroyed. The commons erdeems the public from their condition as subjects/consumers and fragments society into communities that resist reality. There are no commons without a community: making it visible is the task of the laboratory.

These ideas can be used to transform the usual seminar format into a lab of ideas. Organizationaly we address the need for an open and collaborative environment. Our primary objective is to create a structure where both research and production are processes permeable to user participation. To that end, MedialabPrado offers a permanent information, reception, and meeting space attended by cultural mediators. Also it makes open calls for the presentation of proposals and participation in the collaborative development of projects. Some current projects working with this model are:
There are many other active projects currently underway at the Commons Lab which are listed in the appendix to this document.


Proposing an Ontology for the Commons as a Lab Task

One of the unsolved questions about the Commons is how to make a comprehensive picture, a inclusive map, of an issue so varied and manifold: the commons embraces practices old and new, from ICT inovations to environmental issues or the new laws on patenting and copyright. In our opinion that picture would be of great help in identifying, classifying and locating the aspects, elements and conflicts that comprise the commons.

Our proposal from the Commons Lab is to create a collaborative context to accomplish that theoretical task. To create a map or graphical description using three different coordinates: categories, elements and attributes.

We have considered 4 basic categories: body, nature, urban, digital. Each of them has three subclassifications (elements): for instance the body comprehends parts, functions, and representations. Also there is another classification according to attributes: kind of good, kind of threat, kind of management, time scale, spatial scale and the nature of the good that each commons shows. Somehow we imagine a three dimensional way of locating particular commons. There is also another key element for this classification. We use the semantic web to classify automatically and through the web the different commons. Using free software, using tags and metatags it is possible to use the digital commons to render the picture we are pursuing. Using the net means different important issues: first it empowers and broadens the depth of the task and, at the same time reclaims the Internet as another digital commons. Carrying out this project requires also collaboration of many different people, from scholars to activists, from theoreticians to practitioners.

The development of the Commons Lab has evolved from a seminar format where members’ unpublished working documents were discussed to an open laboratory format in which various specific projects are carried out with the participation of any collaborator who wishes to join in, including amateurs, academics and professionals. Projects are received through open calls, followed by calls for collaborators. The groups’ work is carried out online (via mail lists and wikis) and mainly through periodic onsite activities and meetings.

The recent start-up of the Mexican Commons Lab (Laboratorio del Procomún México: www.ccemx.org/procomun) is also a step ahead for the project, given that it offers a wider field of study, enables the sharing of common problematic issues, and contributes what is particular to each local context.

Lastly, discovering a need to establish an overall theoretical framework for the commons has been identified as significant for the Lab, which has led to a proposal by one of the work groups to create an "ontology for the commons".

Broaden the network of collaborators interested in taking part in the creation of the Ontology for the Commons and also study to what extent the Lab can contribute to other similar initiatives.

Include various approaches and perspectives in the creation of the Ontology, taking into account the broad, plural and elusive nature of the concept of the commons.

Discuss and find the most suitable methodologies for the creation of this Ontology, which enable the inclusion of amateurs, academics, activists and professionals in the same forum. 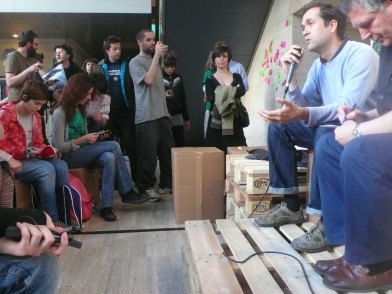